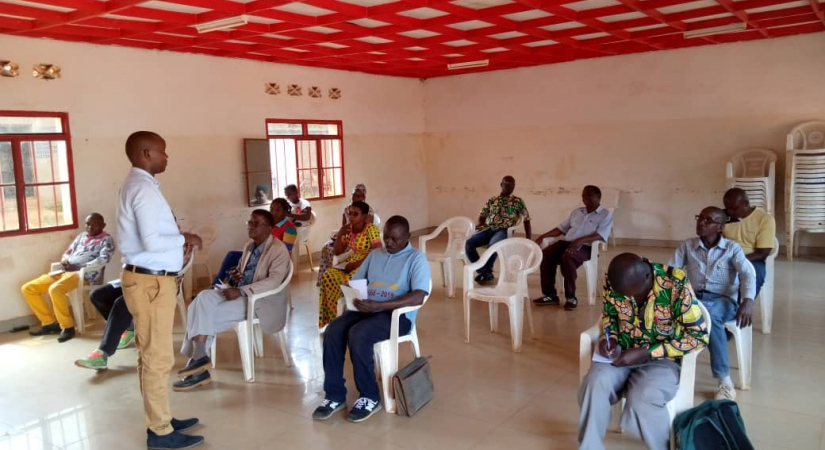 COVID-19 was first identified in December 2019 in Wuhan, Hubei, China and has resulted in an ongoing pandemic. It is an infectious disease caused by severe acute respiratory syndrome coronavirus 2 (SARS-CoV-2) . It spread throughout the world and first confirmed cases in Burundi were diagnosed in March 2020. Since then, fear invaded Burundian citizens as social media were constantly broadcasting increasing confirmed and death cases around the globe.
In fact, when an infectious disease outbreak becomes a pandemic — as with coronavirus disease 2019 (COVID-19) — people are understandably frightened and concerned.
When the outbreak is caused by a new virus, rumors and misinformation run rampant. Stereotypes quickly arise about people who have or may have the disease. In the survey conducted by Centre Ubuntu, findings revealed that whoever from outside the country or a family hosting someone who recently returned from foreign countries have been treated with suspicion and blamed for COVID-19, even though they don’t have any symptoms of COVID-19 and have gone through screening at the border after 14 days of quarantine and tested negative. This deteriorated so much social cohesion in the community.

Blaming and shaming people in this way can be hurtful and dangerous. It makes people targets for misplaced anger and hostility. It also creates hardships and divisions that hamper the response to the pandemic. People who are worried about being shunned or worse may be less likely to get tested or seek medical care, which increases infection risks for them and for others.
In the counseling of stigma victims associated with COVID-19 conducted by Centre Ubuntu in different provinces of Burundi, testimonies show that a lot of people have been stigmatized in the society for different reasons.

“After having come back from Democratic Republic of Congo, I was accused of being COVID-19 positive
Everyone was alerted that I am on the way coming and that I should be avoided. My dad called me and told me that I should stay away from home to not contaminate the rest of the family. I felt rejected, helpless and hopeless. However, I made up my mind to not go back because nowhere else I could turn to. Whoever I met on my way sneaked off to not have any contact with me. I was labeled COVID-19, an outcast in the community. Out of a sudden, I saw a group of young people who threatened me to stone me until I am dead. They decided to take me at a local market called “Nyarure” so that everyone could see a “COVID-19” patient. They discussed where to get fuel so to burn me. My goodness, I got traumatized and started thinking that my birth was a curse. By God’s grace, they didn’t burn me; the police came right away and took me to quarantine. They obliged me to go screaming in the streets saying: “I am COVID-19 positive” run away from me!”. Once in quarantine, they told me to not try to peep through the window. If I didn’t abide by, I was told that I would be shot immediately. After 14 days in that “prison prison” I was released since I didn’t develop any symptoms of COVID-19. Nevertheless, I am still associated with COVID-19 in my community”
Another social stigma case happened in Rumonge in Kirwena zone. After a few days at home from Tanzania, Xavier’s daughter was pointed by neighbors to have come along with COVID-19 from Tanzania.
Xavier recalls:
“Right from work at 3 p.m I found my home empty. On my way coming back, I realized people had a strange perception of me because whoever I came across, s/he tried all the best s/he could to take a distance from me but I could not figured out what was going wrong. The sure thing was that it was not due my skin color as I have Greek origins but was born and grew up in the same place. In my mind, that would not have been the reason no matter what! Just after a few minutes, a lot of cars arrived at home. I saw policemen very quickly jumping down from pickups as if they come to arrest a criminal. I was confused and had mixed feelings. I asked the zone leader what crime I had committed to deserve such scenarios. She violently said that my family wants to exterminate the whole community with COVID-19. That was not reasonable at all through my ears. Still perplexed, one of them told me I had to leave and go where the rest of my family had been taken. In my mind, I thought they killed them and wanted me to join them in the grave. Once I reached them where they were isolated, they told me the whole story that it is because my daughter had returned from Tanzania and that there is a certain friend of hers that used to live with her in Tanzania who had come to pay her a visit. To suspect COVID-19 is not actually that bad but the way we were treated traumatized us. After 14 days we were diagnosed and no one of us tested positive. Until today, we are stigmatized and discriminated by neighbors that we attracted COVID-19.”

Similar stories are uncountable here in the country according to the research conducted by Centre Ubuntu. Stigma can make people feel isolated and even abandoned. They may feel depressed, hurt and angry when friends and others in their community avoid them for fear of getting COVID-19. Perhaps more concerning, stigma harms people's health and well-being in many ways.
They are targets of verbal, emotional and physical abuse. This affects them psychologically. Hence, they necessitate a particular attention through psychosocial supports.